7 November 2018. This year’s Vodacom Journalist of the Year Awards introduced new categories more in keeping with the 21st Century  media landscape, drawing close to 1 000 entries from all over the country. The theme for the 2018 awards is ‘The Pen is Mightier than the Sword’ and the Eastern Cape regional event took place this evening in Port Elizabeth.

Takalani Netshitenzhe, Chief Officer for Corporate Affairs at the Vodacom Group said: “We are pleased with the response to the updated categories that were introduced this year. It’s vital that the Vodacom Journalist of the Year Awards remain relevant and a true reflection of the changing media landscape. Special thanks go to our judges Ryland Fisher, Mary Papayya, Arthur Goldstuck, Elna Rossouw, Patricia McCracken, Collin Nxumalo, Mathatha Tshedu, Albe Grobbelaar, Megan Rusi and Obed Zilwa; who continue to lend their time and expertise in the adjudication of these awards.”

Convenor of the judging panel Ryland Fisher said: “There was an excellent array of entries across the 12 categories this year. The winners can be proud of the work they have done and we hope to see even more entries from this region next year.”

The regional winners in the categories are as follows:

In the investigative category:

Investigative journalism is a key driver in democracies. Journalism 101 teaches us about the role of journalism as a protector of the powerless against the rich and powerful. Our winner in this category epitomises this. Mining in SA grew, and still relies on, the prowess of the less educated labourers who leave their rural homes to sweat in the dungeons of this industry. Many a time, they either go back home broken or in coffins, leaving their families destitute. This is despite the fact that pension deductions would have been made to which they or their families would be entitled. The companies, however, outsource this to Teba which claims it cannot trace the workers or their families. Our winner set out to test whether indeed the beneficiaries of the over R4 billion that was lying in the Teba bank account could not be traced. And he found thousands of them, leading to Teba using his information to trace and pay. The individual amounts paid out may not be millions, but investigative journalism has made it possible for the poorest of the poor to access what is rightfully theirs. The impact of the stories went beyond the Eastern Cape, and extended to all areas in other parts of SA and beyond our borders to Lesotho, Malawi and Zimbabwe. The winner is Bongani Fuzile from the Daily Dispatch.

In the opinion category:

In a category that was highly contested in all regions, the judges had their work cut out. Our winner focused on the traditional practice of Ukuthwala - that involves kidnapping a young woman by a man and his friends or peers with the intention of compelling the young woman’s family to endorse marriage negotiations. The story explores how mothers of young girls “sell” them for marriage under the outdated custom of Ukuthwala. The winners are Zimkhita Manqinana and Cwenga Mgubasi from SABC TV.

In the photography category:

The lack of security and housing has caused many South African spaces to become daily battlegrounds. Destitute South Africans are prepared to go to desperate lengths to keep a roof over their heads. This photographer captures the shocking moments when a father stripped of his dignity and hope flings his baby daughter from the roof of his illegal shack in the hope of stalling a forced eviction.  Almost doll-like, the one-year-old baby lands safely in the arms of an anxious policeman cushioning her fall. The winner is Theodore Jephta from Die Son Newspaper.

In the sport category:

The judges looked for eloquent, lucid, in-depth sports journalism, beyond reporting on results and numbers. This was a fiercely contested category with stories that made the headlines and got the sporting public talking. From boxing to soccer, cricket and everything in between – sports journalists were hard at work with great passion and dedication. The winner stood out with her well-produced and very entertaining entry about the Port Elizabeth Aerobatics pilot Patrick Davidson. The winner is Jayed-Leigh Paulse of the SABC.

In the economic/financial category:

In this category, the judges looked for in-depth features and investigations which combine excellent story telling with illuminating insights.  Dodgy tender processes are regular fodder for financial journalists to investigate. A chance observation led this year’s regional winner to unravelling a string of attempts to circumvent established procedure without appropriate tender and approval processes. For exposing a planned R3-billion plan to install broadband by overriding procedural safeguards, and for preventing an unwarranted part-payment of more than R200-million, the winner is Bongani Fuzile from The Daily Dispatch for ‘Broadband Deal’.

In the politics category:

In this new category in the Vodacom Journalist of the Year Awards the judges looked at rewarding political stories that were well-reported and made a difference to society. The fight against corruption depends to a large extent on women and men who work in various institutions who are prepared to stand up and be counted in exposing the rot that they see. The judges commend Nomazima Nkosi of The Herald, for her story ‘Bay ANC running on empty’, which chronicles how, since the ANC was ousted from running the municipality, its coffers have dried up to the extent that it could not even pay rent. The winning entry deals with the state of misgovernance in one of our municipalities. Auditor General Kimi Makwetu’s report for the financial year 2016/17 found that irregular expenditure in municipalities throughout the country increased by 75 percent from R16,2 bn to R28,4bn. Fruitless expenditure, which is money used recklessly, increased by 71 percent to R1,5bn for the same year. Our winning entry is an incisive story on the Great Kei local municipality, where the administration has broken down, workers went without pay for three months and community action saw the torching of municipal property. Our winner takes the listener to the heart of the matter thus giving voice and face to the statistics of the Auditor General. The Winner is Makhaya Komisa from SABC News Radio.

In the category live reporting/breaking news:

This category not only recognises how the media landscape has changed in the era of social media and 24-hour news platforms, but also rewards journalists who have to think on their feet, often reporting in danger or at disaster scenes without technical support or a carefully crafted script. The winner in the Eastern Cape region reported on a series of front-page articles on a murder case that shook the region. The court case of Bulelwa Ndudula, dubbed ‘the smiling widow in the dock’ unfolded with great precision and detail. Readers could follow a blow-by-blow account of a murder trial, superbly reported, proving that even in this age of technology-driven journalism, newspaper reporting is still a very important platform. The Winner is Asanda Nini from The Daily Dispatch.

In the data category:

In the multi-platform category:

In the multi-platform category journalists must combine reporting flair with the ability to provide material that allows for best, creative use of the multiple platforms and elastic space of digital media, combined with traditional print or broadcast media. This means ensuring elements such as great visuals, interactive opportunities, and skilful adaptations of content to multiple platforms are integral to their storytelling. This series of print stories, photographs and video focuses on the wellbeing of students - or lack thereof - in university residences across the Eastern Cape. It showed us the sheer desperation of students living in appalling squalid conditions. Our winner looks at more than one institution and uses print and video effectively to report on the lives of these students. He uses multi-platform to highlight different parts of the story with little repetition.  He takes us along so that we experience the students’ fight for better living conditions – protesting in the rain and even clashing with heavily armed police. The simple, but thorough, approach to this series painted the touching and sad reality that so many South African students face living in extremely poor university digs. The winner is Sino Majangaza from Tiso Blackstar.

In the Young Journalist of the Year Award:

The Young Journalist Award emphasises VJOY’s commitment to furthering the career of a dynamic young South African journalist. At stake is the chance of a lifetime for the national winner to accelerate his or her professional and personal development through an all-expenses paid trip to follow cutting-edge training overseas, both at the renowned Thomson Foundation and in a London newsroom context. Entrants must have worked in journalism for three years or less and already be demonstrating great future potential. Entrants must submit a body of outstanding work together with a strong motivation showing commitment to the vocation of news well above the norm – this motivation is a critical component of the judging process. All shortlisted entrants will be entered in a further round where they will outline their achievements and their aspirations to the judging panel. Regional nominees will automatically become finalists for the national Young Journalist of the Year Award and the career-enhancing prize. The nominee is Nonsindiso Qwabe from Tiso Blackstar Group.

Regional category winners will receive R5 000 each, national category winners take home R10 000 each, with the coveted national accolade of Vodacom Journalist of the Year Award winner receiving R100 000. The winner of the young journalist award will win an all-expenses paid overseas trip that includes a visit to the Thomson Foundation, as well as the opportunity to work in a newsroom.

The 12 new categories are: 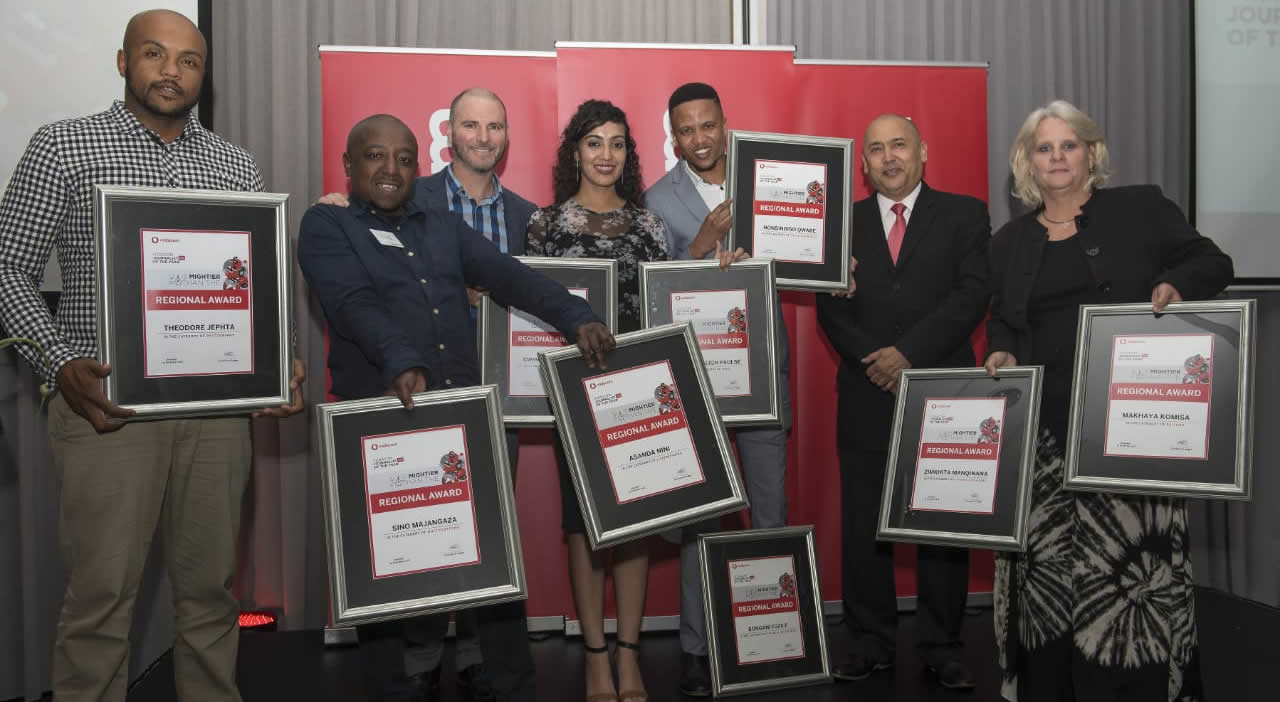