Ookla®, the global leader in internet testing, data and analysis, confirms results from the second quarter 2018 user-initiated test taken with Speedtest®. Renowned for its accuracy when measuring internet performance and network diagnostics, the latest results from Ookla show that Vodacom is South Africa’s fastest 4G network. Using the results of over 185 000 tests across around 55 000 unique 4G devices testing across South Africa, during the period from April to June 2018, Ookla firmly puts Vodacom in the lead as “South Africa’s Fastest 4G Network”[1]. 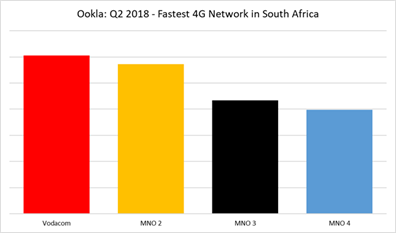 In addition to the Ookla results, Vodacom also went on to claim the title of Fastest Network in ATIO’s All Technology, Q2-2018 results. ATIO is the leading, independent drive testing organisation in South Africa. It uses specialised equipment fitted in custom vehicles to exhaustively trial the various mobile networks with a range of different performance tests.

During the period April to June 2018, ATIO performed hundreds of thousands of tests including up to 100 000 download tests. These tests firmly put Vodacom in the number one position as “South Africa’s Fastest Network”[2]. 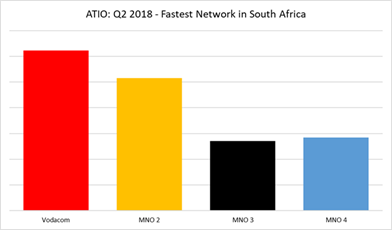 Andries Delport, Chief Technology Officer at Vodacom Group, says: “Vodacom aspires to provide its customers with the best network experience, no matter where they work or live. It is therefore great to see the experts agree that Vodacom is the fastest network in South Africa. Ookla’s latest Fastest 4G results, together with ATIO’s Fastest Network results, are indicative of the success of our sustained network investment strategy.

Vodacom was the first African mobile network to exceed 80% population coverage on 4G and these performance results show that we provide the widest coverage at the best speeds. We remain focused on continuously improving Vodacom’s customer experience as well as bridging the digital divide through ongoing network deployment in rural South Africa.”

Vodacom’s network (capex) spend in South Africa over the last 6 years totals R48.59 billion (FY13-FY18). Vodacom continuously seeks to improve network performance for voice and data services through a combination of network optimisation and the introduction of improved features.

[1] Fastest average download speeds on 4G based on analysis by Ookla® of Speedtest Intelligence® data for Q2 2018. Ookla trademarks used under license and reprinted with permission.
2 As verified by independent ATIO drive testing results (All Technologies, 4G preferred) for the period ending June 2018.