National winners announced for 2017 Vodacom Journalist of the Year Awards.

After one of the most hotly contested awards in the competition’s history, due to the extraordinary variety and calibre of entries, the  winners of the 2017 Vodacom Journalist of the Year Awards were announced this evening. The theme for the awards was ‘Your Word’ and this year over 1 000 entries were received from all over the country across the twelve categories.

Convenor of the judging panel Ryland Fisher says: “This year has been a particularly good one for South African journalists who have shown that, despite dwindling resources, they are still able to chase big and important stories. It was extremely difficult for the judges to decide on national winners, let alone overall winners, because of the strength of the entries we received. We are proud of the many amazing stories that journalists investigated, once again affirming the important role of the media in a democracy.”

Takalani Netshitenzhe, Chief Officer for Corporate Affairs at the Vodacom Group, says: “It’s been one of the most exciting awards to date and we would like to extend our heartfelt congratulations to all of tonight’s winners. Vodacom supports journalistic excellence in South Africa and we are proud that the VJOYs continue to attract world-class submissions.”

“I would also like to pay tribute to our esteemed judges, who give so much time and effort to the adjudication process every year. Our sincere thanks go to Ryland Fisher, Mary Papayya, Arthur Goldstuck, Elna Rossouw, Patricia McCracken, Nikiwe Bikitsha, Megan Rusi, Mathatha Tsedu, Albe Grobbelaar and Obed Zilwa.”

Veteran journalist Dr. Phil Mtimkulu is the winner of the 2017 Vodacom Journalist of the Year Lifetime Achiever Award. He was one of the founding members of the Union of Black Journalists in 1972 and was its secretary when it was banned on October 19, 1977 along with other black consciousness organisations and three publications. After the ban lapsed, Dr. Mtimkulu went on to forge an illustrious career in journalism, working for The Sowetan as a journalist and for The Star as assistant news editor. In 1987 he joined academia, teaching at Unisa and taking his work as a journalist to a higher level (see full citation in Notes to Editors).

The national winners in the various categories are as follows, with each winner taking home R10 000:

TV FEATURE
For a series depicting the faces of a tragedy that shocked the entire country and turned the spotlight on health service delivery, our national television feature winners are: Kyla Herrmannsen, Shamiel Albertyn, Ashley Market, Tshepo Dhlamini, Tshidiso Lechuba and Sungani Phiri of eNCA’s Checkpoint and Health-e for “Life Esidemini”.

SPORT
For going off the beaten track to deliver an illuminating and engaging story that dispels the assumption that South African cricket is a white man’s sport, the national winners are: Ronald Masinda and Nceba Ntlanganiso of eNCA for “A game loved by All”.

ONLINE
Online journalism in South Africa proved that it had come of age in 2017, thanks to support from both mainstream media and from several independent institutions training and guiding journalists and assigning investigative projects. Data journalism is the freshest of journalistic disciplines and was well combined by our national winners with investigative techniques to uncover the potentially life-or-death delays to the prescribed removal of asbestos in schools. The national winners are: Laura Grant & Alastair Otter for “Hidden danger: asbestos in Gauteng's schools” for Passmark and TimesLive.

RADIO FEATURE
As well as creatively using a wide variety of sound elements and production techniques to grab the listener’s attention, the national winner persevered for nearly two years in investigating the story of an innocent man who spent 17 years in jail. The national winners are: Paul McNally, Kutlwano Serame, John Bartmann and Freddy Mabitsela of Citizen Justice Network for SAfm for the eight-part series, Alibi.

CSI/SUSTAINABILITY
Excellent use by several finalists of investigative journalism techniques emphasised how this category has grown in strength this year. For an outstanding and brave expose of corruption allegations threatening the region’s water supply, the national winner is: Sipho Masondo of City Press for “Watergate”.

RADIO NEWS
The winning Radio News finalist clearly understood the radio medium, knowing how to balance narration, emotion, drama and even some striking sound effects. For an outstanding report on the dangers of WhatsApp voice notes, the national winner is:  Hanri Wondergem of SABC RSG for “WhatsApp-paniek”.

PRINT FEATURE
|The national winner for Print Feature was true to journalism’s duty as the voice of the voiceless and the poor. The judges hope that the winning depiction of the festering legacy of a single-sex women’s hostel will prick the conscience of both eThekwini Metro and the KZN provincial government to create accommodation for these mothers and children that respects human dignity. The winners are: Tania Broughton and Thuli Dlamini of The Times for “Inside apartheid’s hostel”.

TV NEWS
More than twenty years after achieving democracy, South Africa did not expect to see what looked like pre-apartheid protest battles as young people fought for affordable tertiary education for all. For dramatic, informative and fluid coverage, the winners are: Malungelo Booi, Lirandzu Themba, Mlingane Dube and Thuthuka Zondi of eNCA for “South Africa’s fees crisis”.
PHOTOGRAPHY

A good photograph tells a story – but a great photograph also makes one feel the truth of the moment depicted. Two finalists particularly laid bare the frustrations, anger and eventual pain flowing though large sections of South Africa now. The joint national winners are: for emotive photographic reports of today’s youth revolution: Alon Skuy of The Times for “Fees must fall”. AND for a creative photographic essay showing the devastating consequences of South Africa’s scourge of domestic violence: Phandulwazi Jikelo of the Cape Times for “Blind and in despair amid hardship”.

YOUNG JOURNALIST
This award provides an opportunity to fast track a young journalist’s professional and personal development through an all-expenses paid overseas trip that includes a visit to the renowned Thomson Foundation, as well as the opportunity to work in a newsroom. This year’s winner is Monique Mortlock from Eyewitness News. 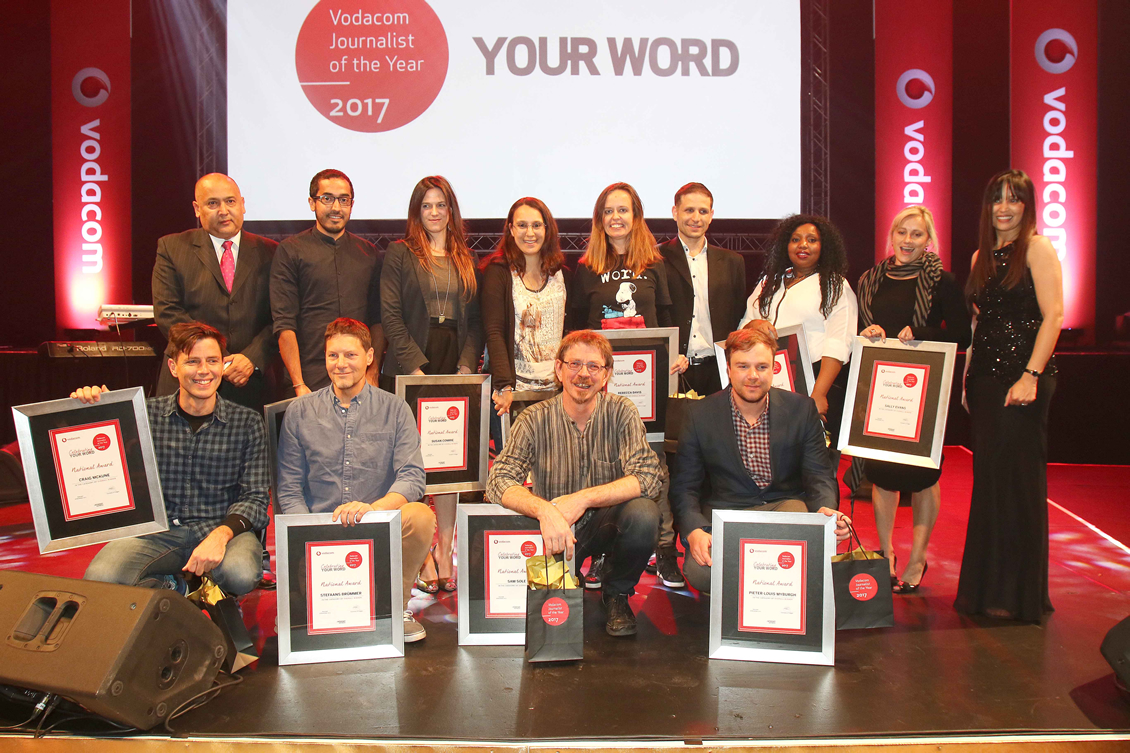