The Western regional awards for the 2017 edition of the Vodacom Journalist of the Year took place this evening (26 October) where journalists were recognised in 12 categories for outstanding work. The theme for the awards this year is ‘Your Word’ and promotes the integrity of journalism across all media. This year’s competition drew over 1 000 entries from all over the country, including 205 entries from the Western region.

Convenor of the judging panel Ryland Fisher says: “The entries across the 12 categories were excellent this year. Our criteria for judging is to look for entries that could possibly make the cut for the national finals, and the overall prize of R100 000 for the journalist of the year award. We were extremely impressed with the standard of entries which we received in the Western Region, with some commendations for excellent work given over and above the regional winners.”

At a function held at the Marriott Hotel Crystal Towers in Cape Town, winners in the Regional categories each took home R5 000, with the exception of the Young Journalist of the Year regional finalist, who received a certificate. All the regional winners go through to the national awards in Johannesburg on 16 November 2017.

Takalani Netshitenzhe, Chief Officer for Corporate Affairs at the Vodacom Group, says: “We are delighted to announce the Western regional winners in Cape Town for the 2017 Awards, which honour journalists from around the country by recognising their best work from the past year. We look forward to welcoming them at the national finals.

The winners of the 2017 Vodacom Journalist of the Year Regional Awards in the Western region are:

The Western Cape had its fair share of bad news in the past year, challenging Radio News reporters to cover stories of tragedy, pain, disaster and often murder. For the high standard of reporting on the tragic death of three-year-old Courtney Pieters, the regional winner is: Kevin John Brandt of Eyewitness News.

Good use of sound, great analysis, high impact and brilliant story telling on a complex and controversial subject made the regional winner in the Radio Feature category exceptional. This story was of the highest standard, taking an in-depth look at the campaign for affordable housing. The regional winner is: Rahima Essop of Cape Talk for “A place to call home”.

The quality of Sports writing in South Africa is outstanding and widely varied. Very well shot and edited, the regional winners found a story from off the beaten path which highlights an important reality – that cricket in South Africa is not only a white man’s sport. For their depiction of cricket in the rural Eastern Cape, including the fervour of locals who love the sport, the regional winners: Ronald Masinda and Nceba Ntlanganiso of eNCA for “A game loved by all”.

Entries to the CSI/Sustainability category consistently prove that the best exponents apply all the most demanding journalistic skills to this beat. The judges want to commend Jay Caboz of Forbes Africa for tenaciously following the fracking issue and raising early critiques of the viability of available shale gas in the Karoo in “The fracking future fades”. This specialist category rewards excellent in-depth reporting in any medium and the regional winner took risks to create an exciting and thought-provoking report in both a well-made video and an online feature. For outstanding portrayal of how the dilemma of shellfish poaching is a matter of survival for some, the regional winner is: Aletta Harrison, freelance for Eyewitness News, for “Turning the tide on poaching”.

Talk about transformation and decolonisation of our culture, education and other spaces abounds. But black learners at Sans Souci Girls High School in Cape Town found out that sometimes the more things change, the more they stay the same. They were forbidden to speak their indigenous home languages and forced to tie their hair in ways that could be achieved only if that hair had been stretched. For showing why the Mother City is also part of the debate on the politics of black hair and languages and how these learners joined others around the country calling for an end to cultural imperialism, the Print News regional winner is: Lisa Isaacs of the Cape Times for “Not allowed to speak Xhosa”.

The many good entries for the Print Feature category in the Western region included the well written, the quirky and the historical reassessment. The regional winner demonstrated how a strong feature writer can take ownership of an important news story by following it up with a series of in-depth articles. For a series on the theft of police weapons and their sale to gang members, the regional winner is: Maygene Prins of Die Burger for “Kolonel se wapens eis 1066”.

In the emerging age of data journalism, much of a story’s impact revolves around how it is presented online. The judges want to commend the extensive use of various digital formats by the OpenUp team to tell the human story behind the numbers in “Long commute to freedom” for Code For SA and City Press. However, the regional winner proved that there is still plenty of opportunity in the online medium for courageous reporting. Traditional, hard-nosed, enterprising journalism combined text, photos and video, often obtained at great risk to personal safety. The regional winner, who laid bare some of the inner workings of the Cape Town underworld, providing a rare insight into the characters behind the nightclub security turf wars, is: Caryn Dolley of News24 for “Underworld unmasked”.

Photographic journalism is clearly flourishing and relevant in this region, making for robust competition. The judges would particularly like to commend a series of strikingly creative images achieved by sharing the risks of going underground with illegal miners into reopened shafts: Cindy Waxa’s for “Survival beats safety at deadly illegal mine” for the Sunday Argus. The regional winner creatively used the subject and the light to reinforce a story depicting the harsh truth that one in five women in South Africa experience domestic violence. For a series of photographs showing the devastating consequences for a woman beaten to blindness by her partner, the winner is: Phandulwazi Jikelo of the Cape Times for “Blind and in despair amid hardship”.

Some stories seem to be everlasting, interest in them ebbing and flowing. Yet they can still produce honest and often horrifying results. Stories in the crime beat often follow this pattern and also demand huge commitment from journalists to get the real inside story by spending considerable time gaining a subject’s trust. For an unflinching reflection of what is happening in one of the Cape’s oldest gangs, the TV News regional winners are: Athi Mtongana and Mario Pedro of eNCA for “Gangsterism in the Western Cape”.

The winner in the region gets a certificate and goes through to the national round to compete for the overall prize. The overall award provides an opportunity to fast track a young journalist’s professional and personal development through an all-expenses paid overseas trip that includes a visit to the renowned Thomson Foundation, as well as the opportunity to work in a newsroom. To enter this category, the journalist should have worked in the media for up to, but not more than three years, and be able to demonstrate their potential through their entries. The winner is Monique Mortlock from Eyewitness News. 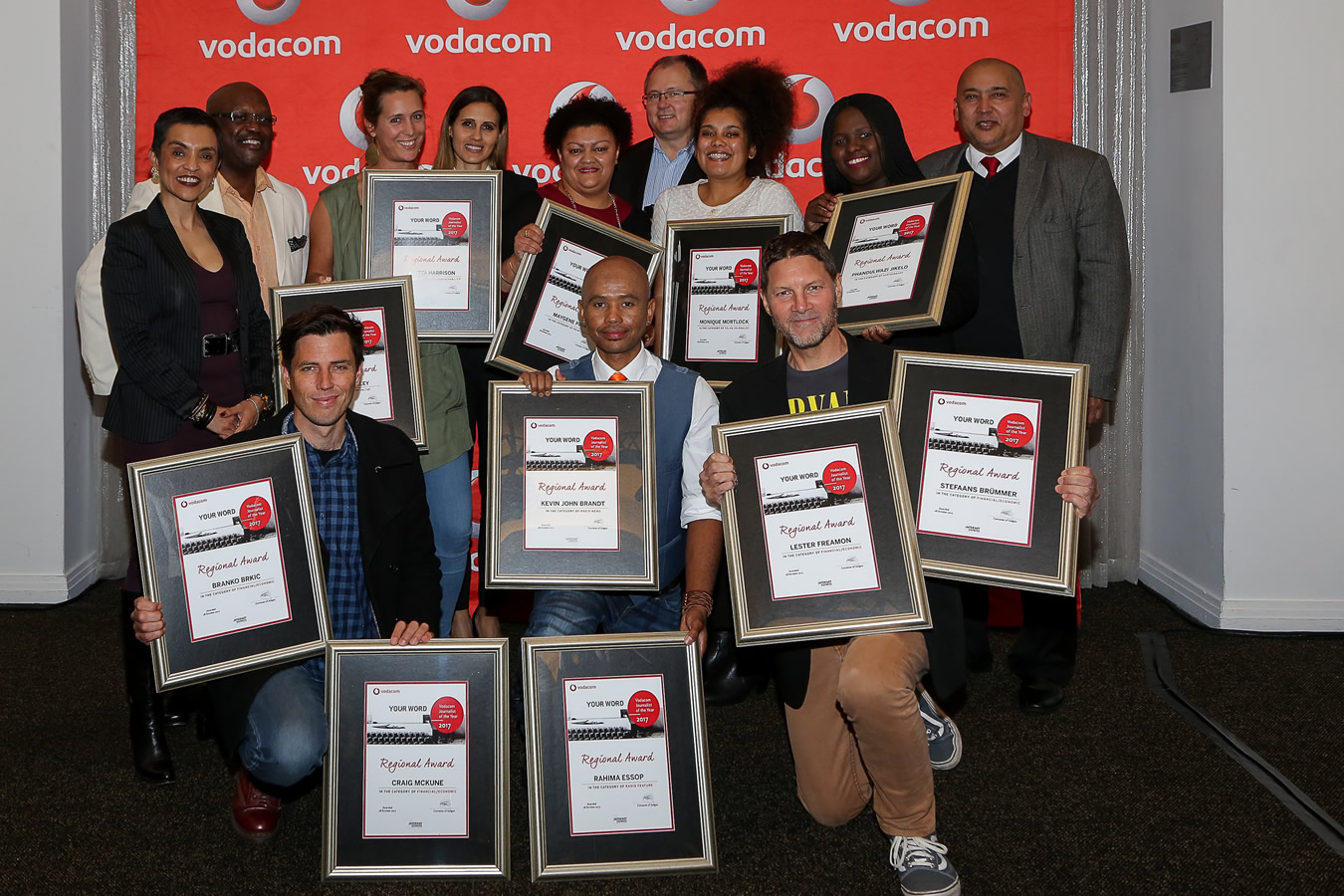