The Central regional awards for the 2017 edition of the Vodacom Journalist of the Year took place this evening (18 October) where journalists were recognised in 12 categories for outstanding work. The theme for the awards this year is ‘Your Word’ and promotes the integrity of journalism across all media. This year’s competition drew over 1 000 entries from all over the country, including 188 entries from the Central region.

Convenor of the judging panel Ryland Fisher says: “The entries across the 12 categories were excellent this year. Our criteria for judging is to look for entries that could possibly make the cut for the national finals, and the overall prize of R100 000 for the journalist of the year award. As always, the entries from the Central region were interesting and enjoyable and, in some cases, even quirky. But all of this is what makes a competition such as the Vodacom Journalist of the Year so special.”

At a function held at the Protea Hotel Bloemfontein, winners in the Regional categories each took home R5 000, with the exception of the Young Journalist of the Year regional finalist, who received a certificate. All the regional winners go through to the national awards in Johannesburg on 16 November 2017.

Takalani Netshitenzhe, Chief Officer for Corporate Affairs at the Vodacom Group, says: “We are delighted to announce the Central regional winners in Bloemfontein for the 2017 Awards, which honour journalists from around the country by recognising their best work from the past year. We look forward to welcoming them at the national finals.

The winners of the 2017 Vodacom Journalist of the Year Regional Awards in the Central region are:

A good Radio News story must fit into a very short time frame with a variety of sound elements, interviews and even translations. Telling a difficult story and balancing different opinions in only a few minutes is a challenge competently achieved by the regional winner: Neo Bodumela of SABC News for “Negligence at Kimberley Hospital” and “Elderly woman raped”.

Great analysis and story telling with good use of sound clips gave the winning entry all the elements of a good Radio Feature. In addition, it tackled a difficult and extremely sensitive topic in a very professional manner.  The regional winner is: Earl Coetzee of OFM News for “State capture fallout”.

A beautifully written story made the reporter the judges’ unanimous choice to win the Sport category in the region. The reporter also took all the memorable accompanying action pictures in this story about a schools rugby match. The regional winner is: Christiaan Cloete of Noordkaap Sport for “Northerns Onderskep Sege”.

The judges expected a better response to this category from a region brimming with Sustainability issues. The regional winners, however, did an excellent job in pinpointing the conniving and corruption that confronts and threatens to defeat many of the poor who rely on natural resources for their survival. This specialist category rewards excellent in-depth reporting in any medium and this year, the regional award goes to a thought-provoking and well-produced TV feature: “Vissers debakel” by Keith Sayster and Eddie Stemmet for SABC Fokus.

The passing of a highly respected and internationally recognised South African literary figure is news. If there is evidence that the person planned his own death, the circumstances become even more newsworthy. The Print News regional winner is: Elsje du Toit of Volksblad for her combined coverage entitled “Karel Schoeman sterf”.

Feature writing allows a journalist to explore and expand the boundaries of print news. From an unlikely start, a story set in a small town in the Northern Cape proved to be irresistibly charming and engaging. The regional winner is: Charne Kemp of Volksblad for “Wat in Vosburg gebeur, bly in Vosburg”.

Fine writing, effective video interviewing and excellent visuals are all elements that draw the reader into an Online story. Another temptation in online journalism is to focus only on issues of the day or fall-out from major stories or social crises. But our regional online winner brought to life a strong human-interest story: Andre Damons of Netwerk24 for “Vir 18 jaar het hy dwelmhonde opgelei”.

Financial and economic issues are a fundamental media beat because they reflect the impact of political power and decision making on community and individual welfare. These aspects were particularly highlighted in the debacle over SASSA payment management. This category rewards excellent in-depth reporting in any medium and our winners combined in a TV feature elegant contextualisation with moving interviews from victims. The winners are: Keith Sayster and Jabulani O-A Afrika of SABC News for “SASSA uncertainty”.

Creativity is tested to the limit and all photographic elements used to portray the beauty of our country is portrayed in a new light in this creative photo essay. These outstanding images show the unusual transformation of nature when winter snow and ice start to dominate the South African landscape. The regional winner is: Mlungisi Louw of Volksblad for “It's South Africa”.

The right to education is enshrined in the South African Constitution – but it is far from easy to enforce if you are disabled and living in the Northern Cape when you may have to wait up to four years to find a school that will accept you. The TV news regional winner highlighted the plight of these learners: Refilwe Gaeswe, freelancing for SABC TV for “Education denied for Northern Cape children with a disability”.

Some communities have to adapt more than others to the demands of our rapidly changing economy to integrate a rich culture, heritage and age-old ways of survival with an uncertain present. Shot beautifully, the winning TV Feature brought to the fore people on the outskirts of society. The regional winners are: Keith Sayster and Gerhard Botes of SABC Fokus for “Karretjie mense”.

The winner in the region gets a certificate and goes through to the national round to compete for the overall prize. The overall award provides an opportunity to fast track a young journalist’s professional and personal development through an all-expenses paid overseas trip that includes a visit to the renowned Thomson Foundation, as well as the opportunity to work in a newsroom overseas. To enter this category, the journalist should have worked in the media for up to, but not more than three years, and be able to demonstrate their potential through their entries. The winner is Katleho Morapela from OFM News. 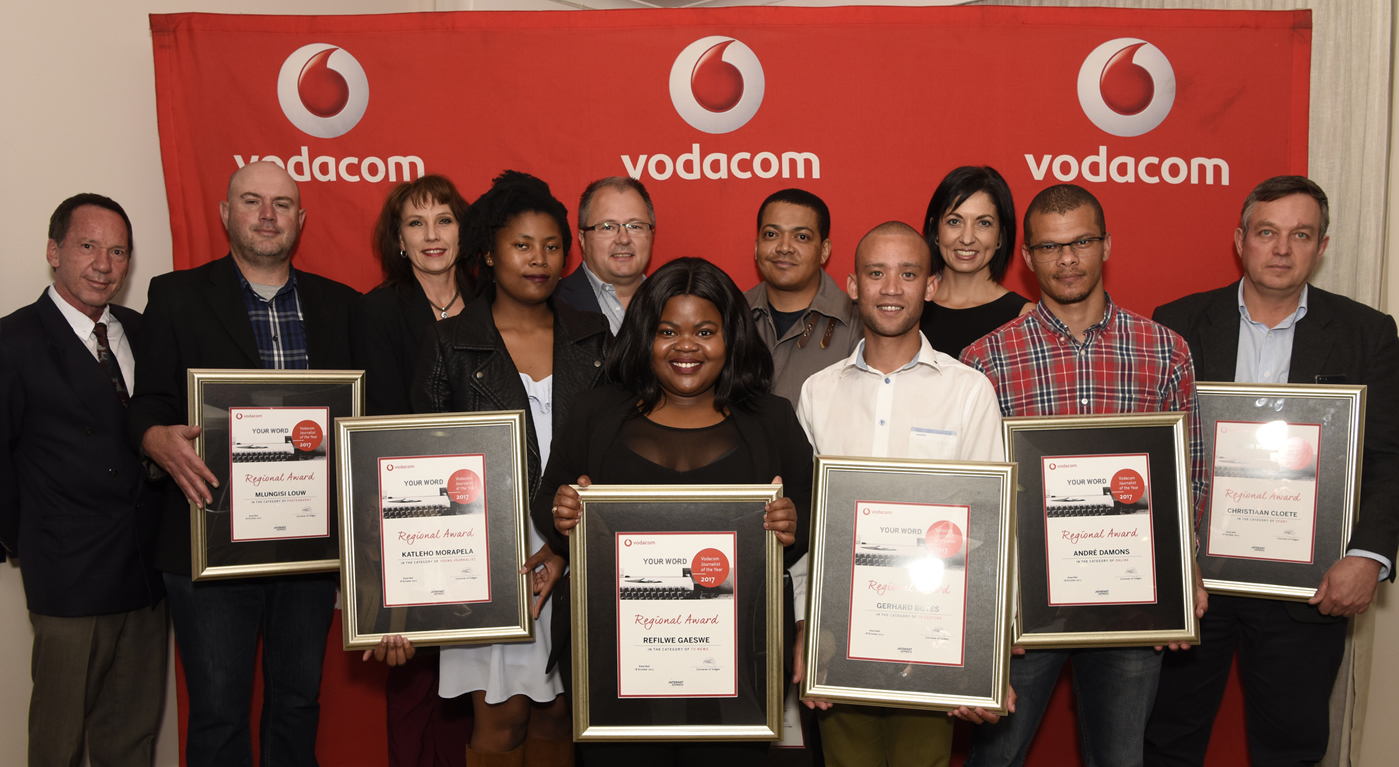