The Brooklyn Mall, situated in the heart of Pretoria’s cosmopolitan Embassy suburbs, can now lay claim to “The fastest 4G+ shopping mall in South Africa”. This follows speed tests performed on Vodacom’s network at the mall, clocking an impressive 240Mb/s on 4G+.

These speeds were achieved by the careful optimising of Vodacom’s 4G+ network at the mall, via refarming of existing spectrum and utilising advanced antenna technologies. With the recent launch of latest generation handsets, even higher speeds can be expected.

“The blazing speeds on our 4G+ network at Brooklyn Mall are further proof that our mobile network continues to be the best in SA. Crucially, the impressive speeds at this mall showcase the kind of superfast connectivity that we can provide to South Africans, if we had access to spectrum. Access to additional spectrum would help us to do a lot more to extend coverage in the rural areas of SA .

Recent studies by the World Bank have shown that a 10% increase in a country’s broadband penetration results in a 0,6 % increase in gross domestic product.

Including the current period, capital expenditure across the Group will total R40.6 billion over a three-year period with R27.4 billion in South Africa alone.  If we factor in inflation, Vodacom has invested R142 billion in its network infrastructure in SA since its inception.

Vodacom’s 2G network now covers 99.9% of the country’s population, with 3G at 99.2% and 4G at 70%. This is the broadest coverage of the country’s Mobile Network Operators and underpins the company’s commitment to making broadband even more accessible for South Africans. 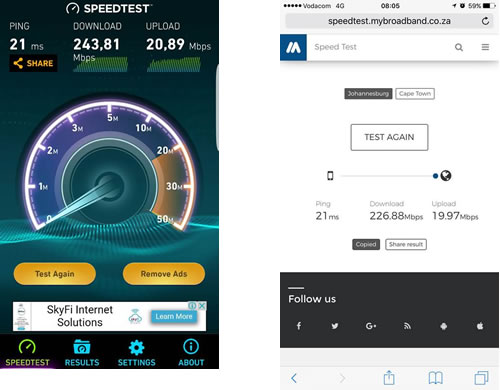